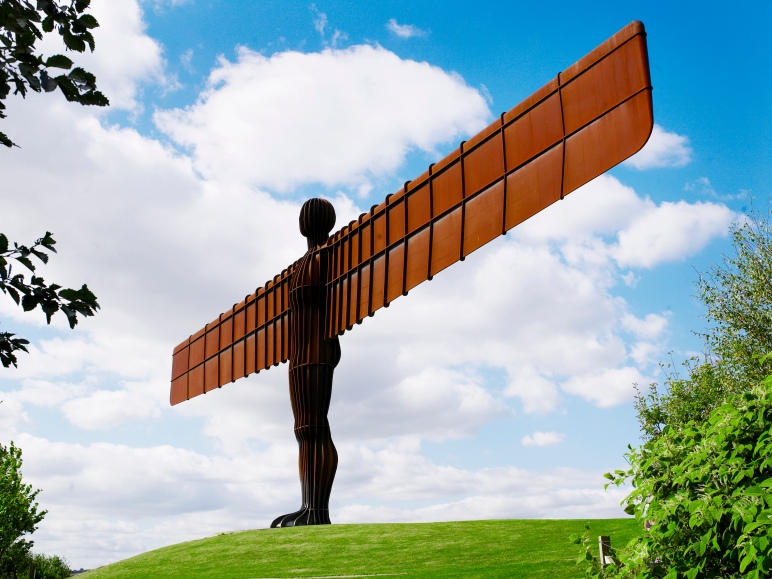 England ‘north of Trent’ was for centuries the administrative division whereby the counties north of the Rivers Trent and Humber were distinct from southern England. Originating in medieval times, the King’s Council in the North (usually sitting at York) was made responsible for the North, while the government in Westminster exercised authority in and over the South. The Church of England was also divided into a Northern Province (governed from York) and a Southern Province. This administrative division in Crown and Church government provided the formal origin of a ‘North/South’ divide in English history, though the North has still deeper roots in earlier kingdoms (notably Northumbria) and the Roman province centred on York.

Britain also has a recognisable East/West divide, but this has always been a more subdued part of northern identity. Northern solidarities generally unite the North-East with the North-West before either would associate with the South. An East/West divide is perhaps more strongly articulated within the South, where the ‘West Country’ is a world away from the metropolitan Home Counties. In Shakespeare’s plays, fools and rusticks were portrayed on the London stage with a West Country accent.

England’s rulers long dreamed of a united island of Britain, and when the Welshman Henry Tudor became King Henry VII he hoped to incorporate Scotland into his realm. When King James VI of Scotland became King James I of England, this British king considered moving the capital of a united North and South Britain to York. James’ scheme foundered on the resistance of English politicians to an Anglo-Scottish Union, which was not to be achieved until Oliver Cromwell united Britain by force in the 1650s and the Edinburgh and Westminster parliaments created in 1707 a united Great Britain as the core for an overseas empire. As London became a world city, no-one again proposed York as a capital for all of Britain. Had the political capital been planted at York, London would doubtless have remained the financial and cultural capital – like Canberra and Sydney in Australia, or Washington D.C. and New York in the United States. Within Great Britain, at a distance from the political and cultural capital at London, northern England was free to develop its own cultural trends.

Throughout the Middle Ages northern England was generally less prosperous and less populous than southern England; already, south-east England was the more developed economy and greatest contributor of tax. Fortunes changed with the Industrial Revolution. Industrialisation started in the North of England, with the exploitation of Sheffield steel, West Riding cloth and Newcastle coal before reaching its zenith in the cotton factories of Manchester and potteries of Staffordshire. Railways, steam technology and factory production transformed the North in the Industrial Revolution and created an enduring idea of the North as a powerhouse of industry, while southern England became more associated with the rural. Elizabeth Gaskell’s novel, North and South (1854) confirmed the industrial identity of the North in the national imagination. In truth, the North always retained its rural country character alongside industry, with a commercially-developed agriculture that supplied the industrial population with food. Only certain parts of the northern landscape were industrial – where unprecedented feats of human ingenuity and exploitation were alternately admired and condemned from the Industrial Revolution to the present. But the North Country was also powerfully associated with upland and mountainous areas. Long regarded as unproductive ‘waste’ ground and susceptible to lawlessness, from the Romantic poets onwards the peaks of the North were increasingly recognised as places of majesty and aesthetic delight.

With its industry, agriculture, ports and wild mountainous areas, the North of England was never a particularly homogenous area. Nevertheless, ‘the North’ and the notion of a ‘North Country’ was a feature of the Middle Ages that survived to be consolidated by industrialisation and the modern age. Before the twentieth century, people spoke of a North Country as well as their ‘own country’ in more immediate localities defined by landscape characteristics. These home ‘countries’ were far smaller than our modern idea of a ‘North West’ or ‘North East’ of England, and reflected the area of activity in which people lived out their lives. People spoke of entering their ‘home country’ on returning from business in London. By contrast, the regional terms ‘North-East’ and ‘North-West’ are of surprisingly recent date. The term ‘North-East’ was first used in a variety of contexts in the nineteenth century, and featured in the title for the ‘North-East Coast Exhibition’ World’s Fair held in Newcastle in 1929. Yet, only with the advent of broadcasting in the mid-twentieth century – first with BBC Radio, and then with regional commercial television companies (notably Tyne-Tees TV) – did an articulation of a ‘North-East’ identity become part of the culture. Similar articulations of a ‘North-West’ identity emerged in the context of broadcasting based in Manchester and Liverpool. It was the emergence of new networks of communication – now involving people who had not met one another – that forged this new articulation of a North-East and North-West identity. No-one before the twentieth century spoke of these North-East or North-West regions, though they had for centuries spoken of their ‘home country’ – where they knew people directly, in a face-to-face, familiar and localised society – within the North as a whole.

The folk of the North Country possess a distinct culture from the South, and this has been their self-belief for centuries. Within the wider North, particular economies in trade, industry and farming, as well as the ports and fisheries, have all contributed particular regional differences within the wider North. The culture of each district within the North today is still to a considerable degree a legacy of regional specialisation during industrialisation – from the coal industry and shipyards of the Tyne and Wear, to the cutlery makers of Sheffield and the cotton workers of Manchester, and the ports of Liverpool and Hull. All of these industries attracted large concentrations of people, which in turn created particular cultures, with each region retaining today its own distinctive version of Northern-ness. Many of these localities originally had differences in dress that reflected their particular occupational character – such as the blue coats and caps of the keelmen who rowed the coal keels on the River Tyne.

Local identities involved sub-regional rivalries, often with colourful names for the inhabitants of each locale – such as ‘Sand Dancers’ of South Shields or ‘Makems’ of Sunderland alongside the better-known ‘Geordies’ of Newcastle. The subtleties of distinctive cultures gave rise to distinctions in dress as well as dialect, and differences in clothing as well as accent continue to mark out the variations in culture from place to place across the North today. Writing in 1962, Cambridge geographer Gus Caesar nicely captures the spirit of rivalry and intense identity:

‘If a Wearsider visits a pub in Scotswood Road, Newcastle, on a Saturday evening, things may go hard with him, especially if by chance Sunderland have beaten Newcastle at soccer that same afternoon. But if a Wearsider meets a Geordie in a more distant part of Britain, they may well linger over a drink together for they have many interests in common. These relationships epitomize much of the North-East with its intense local rivalries but strong regional unity.’1

The same could be said for the North as a whole.

Dr Adrian Green is a lecturer in Early Modern History at Durham, with an interest in the history of regional identity and the role of regionalisation in economic and cultural history. His wider research focuses on buildings and architecture across England and English settlement in North America during the seventeenth and eighteenth centuries. This essay was originally published on 25 November 2015 at https://showstudio.com/project/north/essay_the_north_country_in_history.